Episode One: The Box Model

In CSS every element is just a rectangular box. That's easy right, its just boxes we move around the screen. Well, sort of, but its really about the content thats in the box that can affect the rest of the box. Notice above the margin, outline, and box shadow are striked-through to show that they do not affect the size of the box itself. They do however, affect content around the box. The first part to think about when understanding the box model is how the sizing is determined, intrinsic or extrinsic.

Extrinsic is when the box size is predefined and content is put inside of it. We would explicitly set the height and the width of the box and force what's inside to stay within its given area. Intrinsic is when the size of the box is dynamic to the content put inside of it. In this style we would allow whatever our content is to determine the size of our box.

Once we figure out whether the content box size is predefined or dynamic, we then have the padding box and then the border box outside of that. These 3 boxes determine the size of the box.So the size of the box is calculated like so:

Outside of the border, we have the margin, outline, and box-shadow boxes. As I said before, these don't affect the inner size of the box. They are painted on after the box size is calculated. You can see this when adding a border to an element versus adding an outline. A border is going to change the size of the box, which the outline will not change the placement of the element. It is important to note that margin is affected by the size of the content and affects the space between elements. It also belongs to the element with which it is added, except in the case of gap where it then belongs to the parent grid (or flex soon) that called it.

Occasionally, you may notice elements automatically have padding or margin applied to them. Such as a list item being indented with padding. These styles are provided by the user agent, or browser, that you are using. To avoid running into issues with this, it is common to use a normalize css or reset css file. There are many versions out there or you can tweak them to your liking.

Scrollbars are interesting in CSS. They live in the same box as the padding box.

Selectors are a syntax used to find elements (aka subjects)in the DOM tree. CSS then uses the selector to bind the styles to subjects. A CSS rule consists of the selector and all the style declarations applied to it. They can be combined together into compound selectors to create more specific rules or be defined singularly. 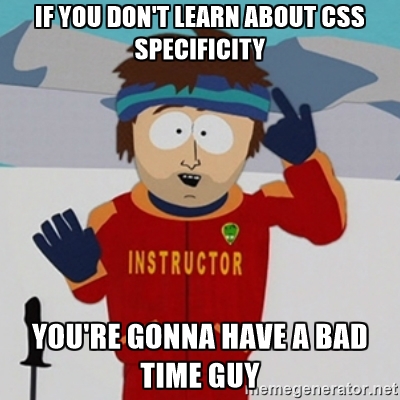 What happens when a subject is being targeted by multiple rules? The rule with the highest amount of points, or specificity, wins out. Specificity is how the browser decides which styles should be applied to an item. A weight or in this example points are given to each selector based on their ranking of least to most specific. Here's the game, we start at 0 and add up the number of points for each selector. If there is a tie, the last rule in the stylesheet wins. And no cheating by duplicating extra classes to your css 😜!

Check your scores in the specificity calculator. How did you do? Hopefully, this article helped you learn a little more about how to calculate specificity and apply it in your CSS!

The "C" in CSS stands for cascade. Basically, this means that location and order matter when you are writing CSS rules. If rules have the same specificity, the one that is used last in the stylesheet will be used. The cascade is made up of 4 phases: 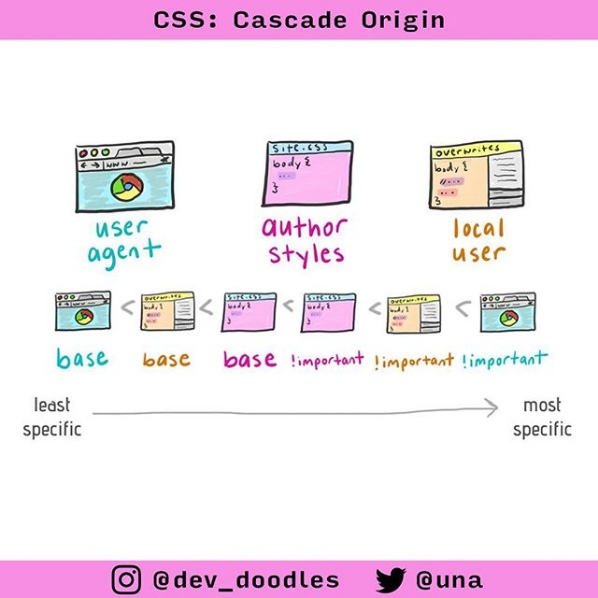